The weekend of 14th to 15th May saw the RG65 fleet compete for the 2022 National Championship at Princes Park lake, Eastbourne, home venue of Eastbourne & District Model Yacht Club.

Of the 23 yachts entered, 22 made it to the start line on Saturday morning after a briefing by event PRO and Eastbourne club member Peter Kemp.

Peter, a relative newcomer to radio yachting in DF95s and IOMs, is an experienced dinghy and keelboat sailor and brought his experience and skill to the running and management of the event. Peter was also a school teacher at one point in a long and varied career, so keeping the class in order was second nature, with firm but fair decisions made throughout the two days of racing. A total of 23 races were sailed on the Saturday in light to moderate southerly winds with wall to wall sunshine, after all,, Eastbourne is the sunshine capital of the south coast, thus allowing a long windward/leeward course to be set within the topographical limits of the lake.

To give a detailed breakdown of how the racing and positions unfolded would be too exhaustive to record here, but by the end of day one and 23 races, Graham Elliott with his Electronica had a firm grip on proceedings at 29 points and he appeared to be on his way to another UK National title unless something major occurred. Victor Rodriguez (Uno) sat in second place overnight on 92 points. Rohan Conrad-Williams from Two Islands with his new Uno design was in third on 101, Peter Baldwin from Birkenhead again sailing a Uno was fourth on 109, and Achille Chatin was lying fifth on 122 giving the Uno even more presence in the battle of the hull designs.

Saturday evening was spent by most at a local Italian restaurant and some ventured on to local hostelries as one would expect. Of course, the second most important event of the year after the RG65 Nationals, was also taking place, namely the FA Cup and then there was of course Eurovision. All in all, a surfeit of televisual delight awaited competitors after their day on the water and a tasty Italian meal!

Then Sunday came with far less fanfare than the previous day and Eastbourne’s sunshine capital reputation was in tatters, it was overcast and initially with winds of reasonable strength but this time from the eastern to north-eastern quadrant and with rain also forecast. When racing did get going after an initial postponement, it was all A rig racing despite the stiffer wind indications given on a number of weather forecasting apps.

A further 10 races were completed when the fickle winds allowed and after an enforced postponement of approximately 2 hours over the lunchtime period which was long enough for the only protest hearing of the event to be heard.

Graham Elliott with his red Brad Gibson designed Electronica again reigned supreme and tightened his stranglehold over the title with a final tally of 41 points from a total of 33 races!

Victor Izquierdo Rodriguez was second on 129, Rohan Conrad-Williams kept up a great string of results to take third on 158, while Achille Chatin moved into 4th after two late in the day first place finishes in the dying breeze on 158 points. Peter Baldwin took the fifth spot with 167 points. 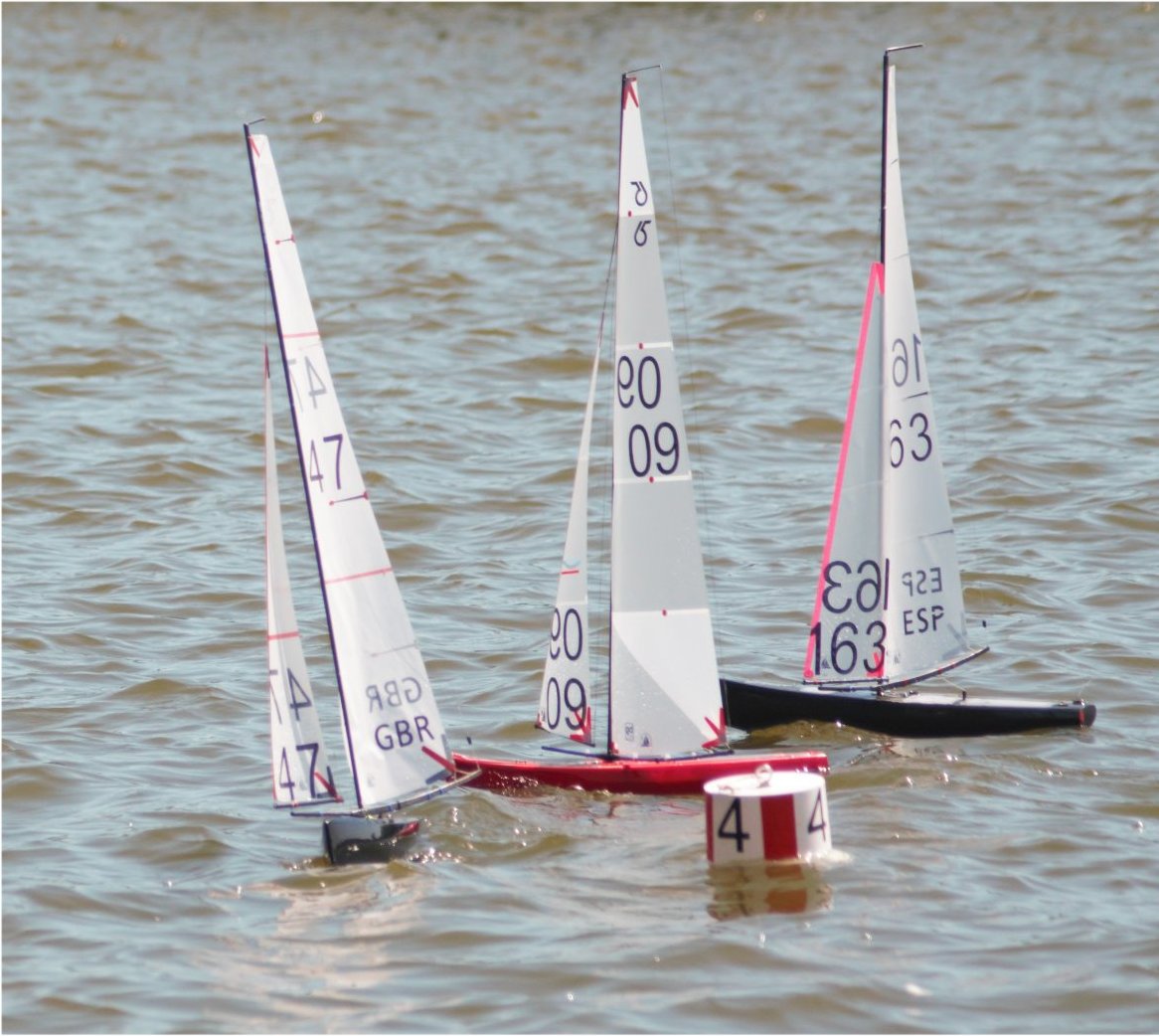 If anyone fancies a nice break in the South of France with some RG65 racing, the French Nationals will be held in Antibes 23rd,24th and 25th September and they are keen to encourage overseas entries. 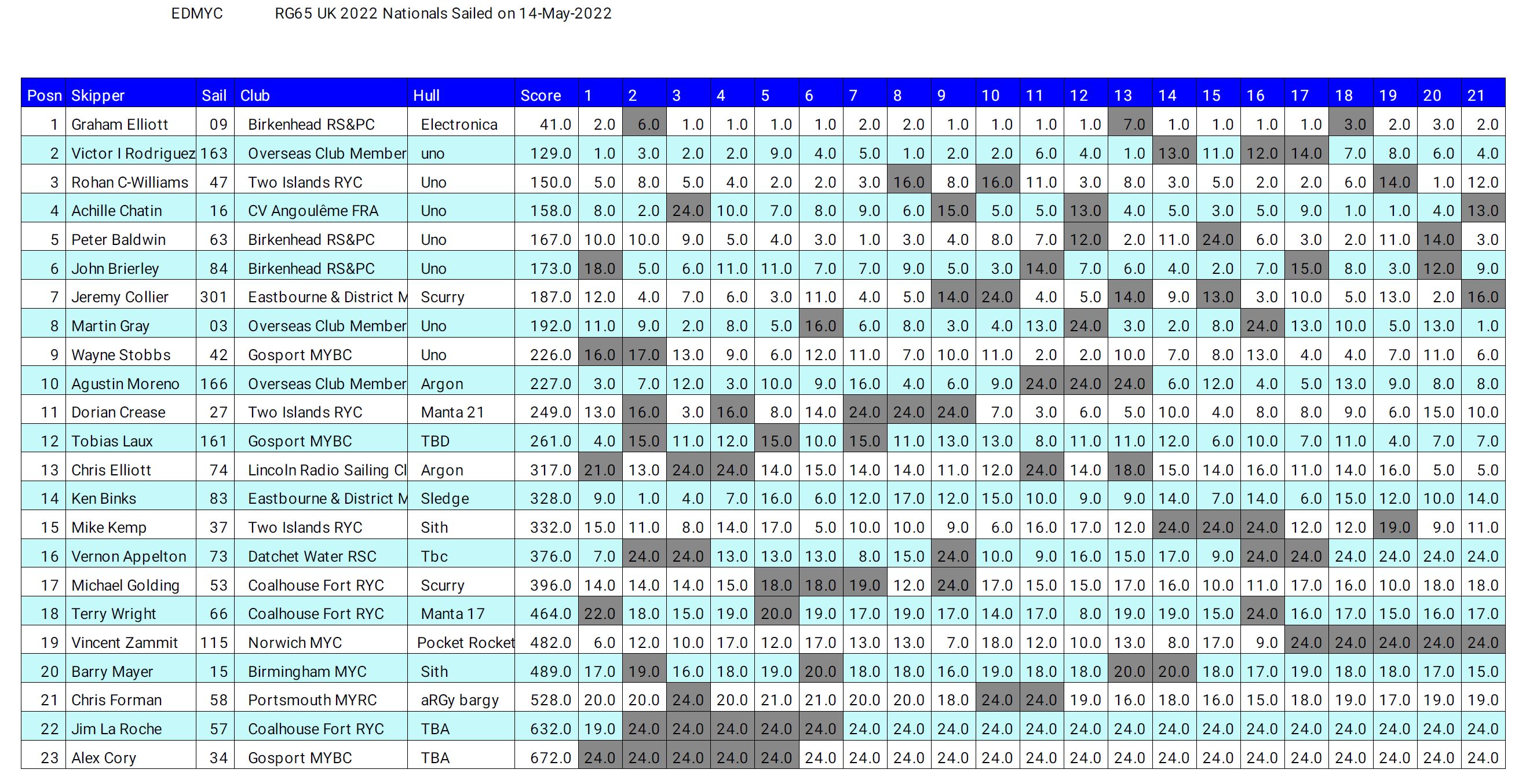 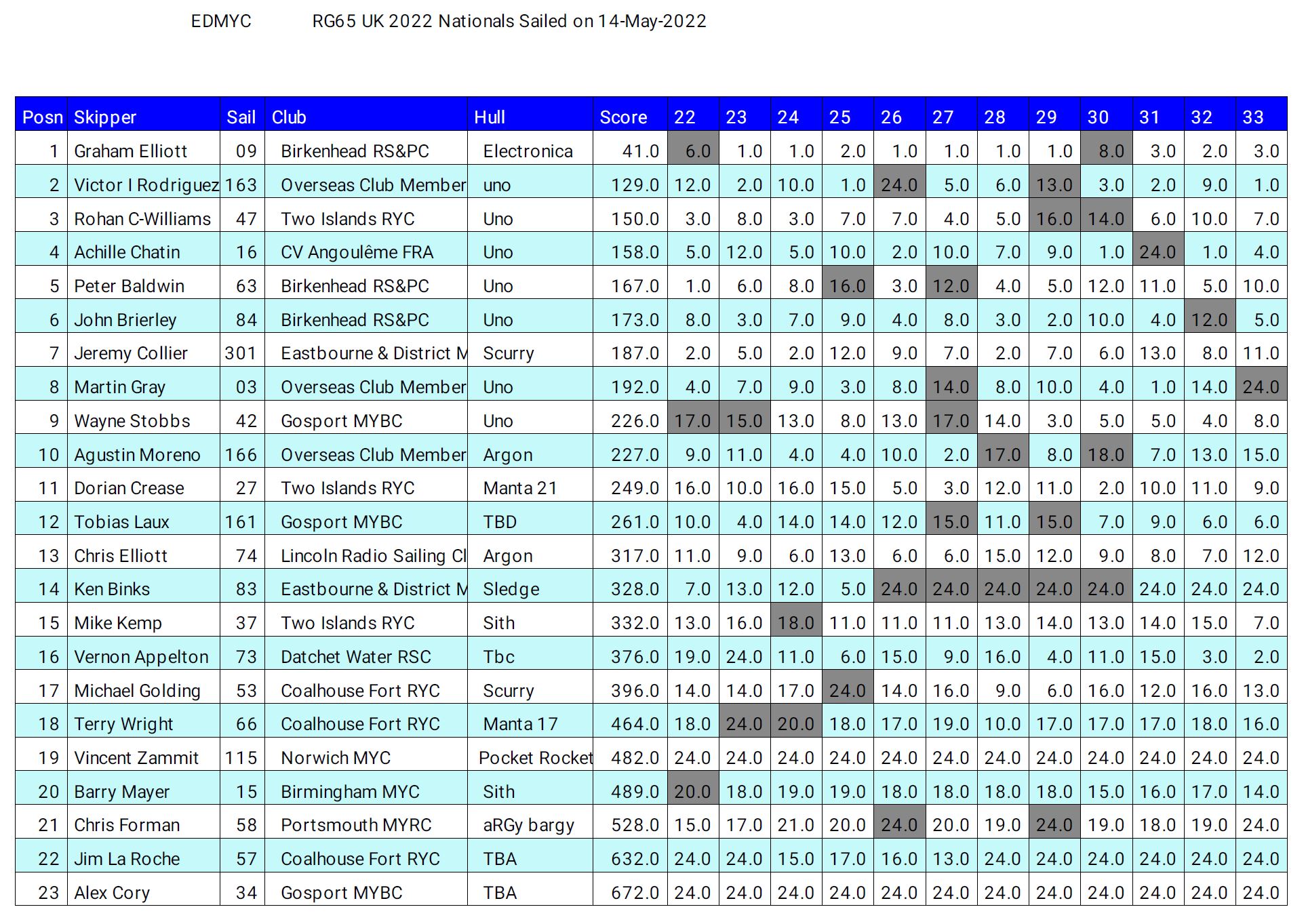 Results can be seen at https://edmyc.org.uk/2022-open-meeting-results/

Just remember to scroll left to see the scores for the two days.

Report by EDMYC and more photos thanks to Julian Tyrer on the RG65 UK Class Association Facebook page.